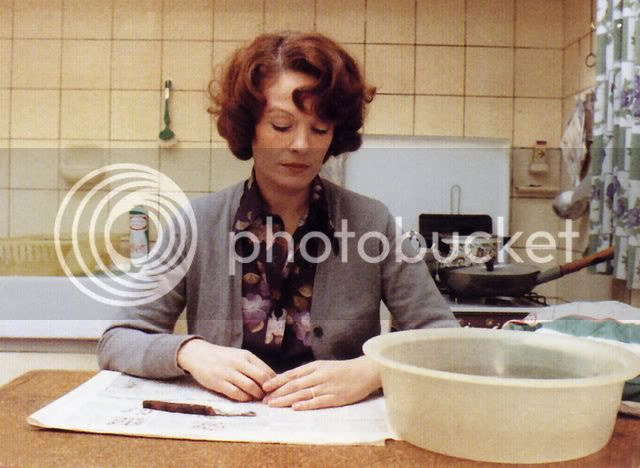 Greater minds than mine have grappled with this monumental film, so I'll only wax enthusiastic about the EXPERIENCE of seeing it in a stunning new print at the Film Forum in NY this afternoon. I'd only seen it on VHS a couple of times, and seeing it in a theatre was an experience different in kind, not degree. Like all great films it demands its own psychological space, daring you to accept the world on its own terms. In the absence of conventional narrative spikes, I was able to see the beauty and complication in quotidian rhythms, something I tend to overlook if I'm following a plot. The scene of the protagonist quietly sipping coffee while Belgian streetlife buzzes outside remains one of my favorites. For some reason I found the 'narrative' in the theatre particularly fractious (perhaps in the absence of conventional narrative elements on the screen). An older gentleman screeched at a man who was supposed texting during the screening, and even went to get a manager! This reminds me of what friend of mine told me about a screening of Warhol's Empire--he tended to over emphasize the things we usually ignore in a theatre setting: a man coughing, a woman crossing her legs, etc etc.
Posted by Mark Street at 4:31 PM